a worker-owned co-operative growing food to celebrate this place

The Queer Farmer Convergence wasn’t actually my idea—one day last January I was crying into my phone to a friend, feeling lonely, needing to be seen. Her response was to create an instagram account for me (@queerdirt) and to make real the idea that queer farmers don’t need to be alone in that intersection of identities—we can come together! I was skeptical at first that a bunch of queer farmy types (the most awesome kind of people) would want to come all the way to my little old farm for a weekend, but I went along with the idea, and as it turns out, a whole bunch of other folx wanted the same things I did, and were willing to drive to Humble Hands Harvest in Decorah, Iowa to co-create those things.

As we created the gathering (this “we” includes the instagram-instigating friend, as well as my co-organizer Jaclyn Wypler, and my co-farmer Emily), we wanted to be clear about what this gathering was about, and who this gathering was for. It was important to me to not have to make people prove either their queerness or their farminess—this gathering was for those who want to center that intersection of queer and farmer, from whatever angle they approached it. Some attendees didn’t identify as queer; others had never farmed; some were firmly in that queer farmer center. But because of the clarity of what our center was, I found it interesting that at the gathering itself, we almost never discussed it! Queerness was the norm, the background assumption, and so was a knowledge of farming and the food system, and, I might add, so was a total comfort with the outdoors and inclement weather and making do! 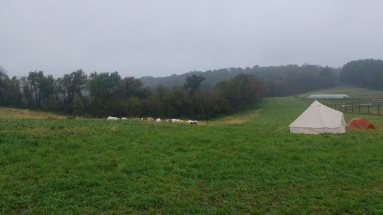 What we ended up discussing were topics like land justice, worker-owned cooperatives,
racial justice, worker justice, and economic justice. We asked the question of reparations: what does that look like, from a queer farmer center, for people who have the privilege of access to land? We also discussed what it means to be connected, to develop a network of queer farmers (see queerfarmercollective.com), and to build a welcoming community. Not only did we discuss these things, we started enacting them! I look forward to seeing the zine that we create from the weekend, and to connecting with these new friends throughout the year, not having to wait until QFC 2019!

And, as I think about next year, I think about what it means to have more people in the gathering. Will we double in size? Triple? How will food work at that scale? Shelter? I know that I’ll want to have a bunch of wood split before the gathering, instead of hoping that it’d get split there before going on the fire… but also, every queer farmer should be equipped with wood-splitting skills, so certainly we should have a skill-share time as well! And logistics of our physical needs aside, how will we structure our time? How many facilitators should we bring on board for small group discussions? Should we bring in a speaker or two to light a fire under us?

Luckily, we’ve got a year to dream and plan, a truly excellent first experience, and the beginnings of a community that tenderly holds the queer farmer center and boldly looks outward into the world.